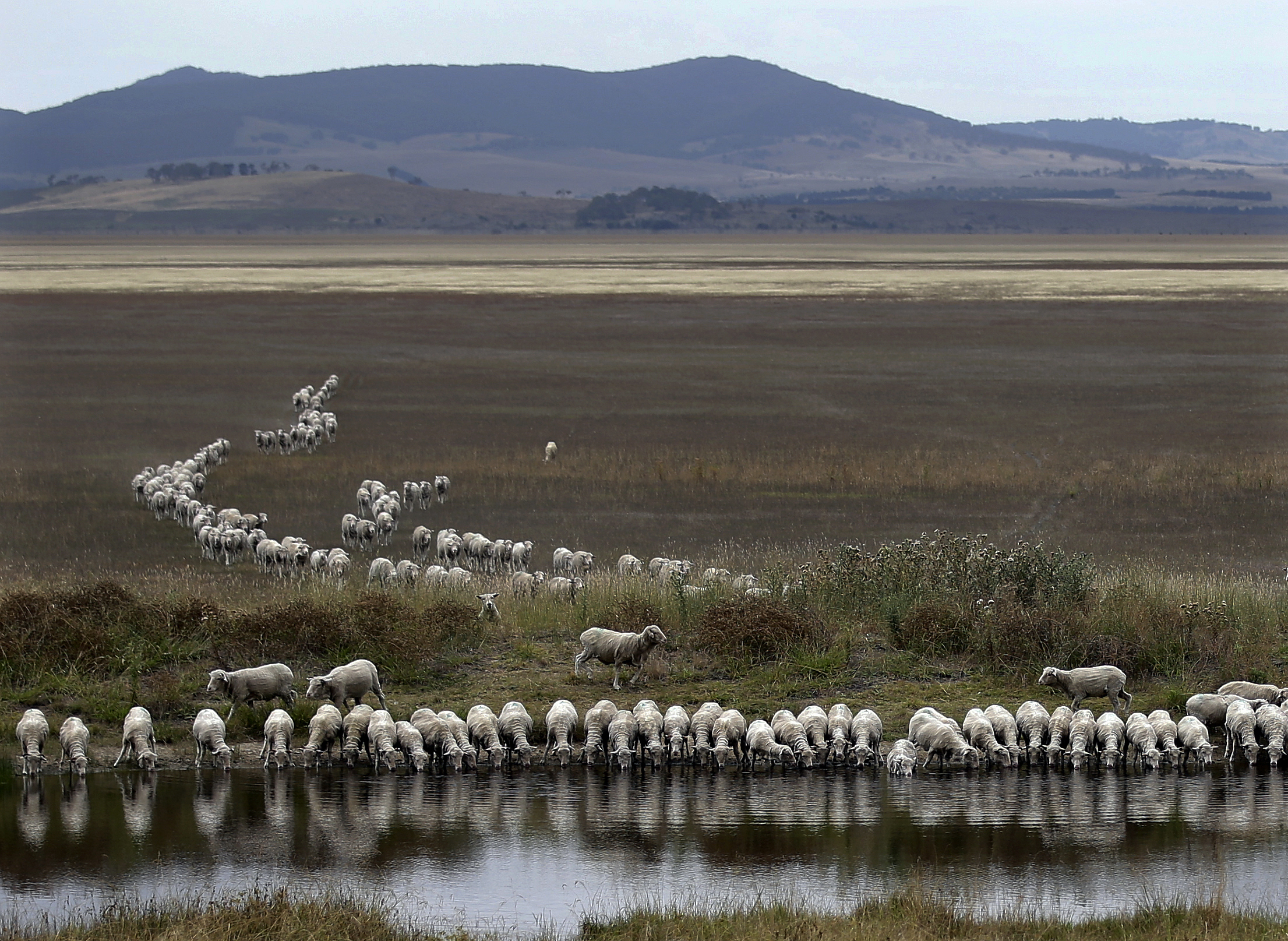 The celebrated water markets that emerged in Australia are working now because politics remained as important as economics.

Severe drought in California and the West has spawned a cottage industry of commentaries about lessons from Australia’s drought, and rightfully so.
There’s a saying in Australia: Norwegians have 50 words for snow, while farmers in New South Wales have 50 words for water reliability.
The Murray-Darling Basin, considered Australia’s breadbasket, is also known as a land of “ droughts and flooding rains ”.
Its irrigation society was once described as bearing a striking resemblance to the Southwest U.S., but this is not entirely true anymore. By many measures, the region weathered Australia’s Millennium Drought (c. 1997-2009) with aplomb: Water availability declined by two-thirds, but the gross value of irrigation agriculture dipped by only 20 percent.
Typical headlines from Australia focus on the miracle of its water markets – the most advanced in the world. In the Southern Connected Murray – a plumbed system of reservoirs, locks and canals – up to 40 percent of water used in a given year has been traded, versus about 5 percent in California . However, focusing on the miracle of the markets risks missing the point.
Water markets in Australia are at least a 30-year “overnight” success.
The initial separation of water rights from land titles began in earnest in the 1980s with an interim cap following in the 1990s, and ongoing updates to diversion limits to achieve sustainable extraction. The water reform process in the Murray-Darling has been as deeply political as it is motivated by economic rationality.
This is not a new lesson for the West. Water markets have been on the radar in the U.S. at least since the 1973 National Water Commission cited water transfers among the “ water policies for the future ”. Yet efforts to import lessons from Australia still tend to overlook the substantial – and ongoing – investments in water policy reform that make markets work.
Australia’s experience shows that water markets have an important role to play. But they are a servant of sound governance, not the master. Above all, markets are certainly not free, nor are they self-sustaining. Like a marriage, they take steady work to adjust as values change.
Empowering Users to Manage Risk
The real lesson from Australia is one of empowering water users to deal with risk. Farmers understand drought risk and water scarcity; they are intimately familiar with strategies to maximize returns to the land. The necessary policy reforms were possible precisely because irrigators were eventually convinced that markets would help them use this knowledge to manage their farms better.In the Western U.S., the language and literacy of water risk are still primitive by comparison. Sustained drought has introduced new terms into the lexicon – water conservation agreements to boost reservoir levels in Lake Mead, water sharing from farms to cities during dry years and so on.
But we’re still missing the policy infrastructure and political will to scale these up. It is here that Australia’s experience offers us lessons. Australians realized that building flexibility into water allocation policy would not be easy, and they committed to a long-term reform project. The ingredients are not sexy: auditing water use, strengthening statutory water planning, cobbling together interstate accords, separating water rights from land titles, creating transparent registers of water rights and incentivizing innovation. Trading rules were built on the premise that the benefits of flexibility outweigh the unintended – or underestimated – impacts on those who might be negatively affected by water trade.
Embracing the Politics of Water Markets

The main threat to ongoing reform in Australia’s Murray-Darling region is that the political process that built the market becomes transformed into a purely technical one. The rollout of the Murray-Darling Basin Plan (2010-12) initially suffered this fate before confronting the politics of “ localism ” and making concessions to compensate farmers, irrigation communities and states bearing the costs of reform. Politics matter in all aspects of the water market, but the impact is perhaps most obvious – and unavoidable – in setting and updating diversion limits. Diversion limits determine how much water can be consumed and how historic water entitlements are treated.

The Basin Plan updated diversion limits to achieve sustainability, requiring parallel efforts to “claw” water back for the environment. The Plan received almost 12,000 public comments over about four months in late 2011 and early 2012. The political pushback from all sides – irrigators, environmentalists and states – led to many efforts to engage communities, some more successful than others. In one promising example, the commonwealth government entered into a 5-year, 50-gigalitre partnership (about 40,500 acre feet) with a non-profit organization in South Australia (the most downstream state) to deliver water for local environmental priorities. It is important to keep parochial concerns from dominating reforms.

But politics, coupled with transparency and public engagement, can provide the basis for moving the reform process down a better path. This also strengthens the water market to handle some – but not all – of the key choices about how water is used. Efforts to use the market to move water out of irrigation regions and between states encountered some of the most stubborn barriers, particularly for “buybacks” of water for the environment.

However, by water year 2012-13, interstate water allocation trades (akin to leasing in the U.S.) comprised about 20 percent of the total allocation trade volumes in the Murray-Darling region. Overcoming political resistance to move water across subcatchments and state borders required sustained engagement amid larger questions of community development and rural livelihoods. To put it another way, politics remained an important part of the policy and institutional reforms governing water markets, a constant renegotiation of the boundary between private choices and the public interest.

The same values that threatened to divide water users and states have formed the basis for an ever-fragile common ground. It may be counterintuitive to let politics sneak into development of the market. But therein lies the paradox: The many economic virtues of water markets depend on sound governance and legitimate political discourse – about how to distribute water between states, between consumptive users and the environment.

The architects of Australia’s reforms have noted that the U.S. has yet to feel the pain of deep shortage, the true necessity that is the mother of innovation. But when we do experience the first Lower Colorado River shortage, let’s draw on the real lessons from Australia, not the glossy version.

Charting Our Own Path

The conventional wisdom suggests that drought is a window of opportunity for reform – a call to action, but not to panic. Any proposal for water reform that embraces politics will need to account for local hydrology and culture, which means confronting the legacies – and commitments – of prior water rights. By all accounts, California and the other Colorado River water users are forging their own path. The signs are encouraging, and 2014 was a banner year: the environmental pulse flows to the Colorado Delta, the passage of the 2014 California Water Bond and the Sustainable Groundwater Management Act are all drops in the unquenchable bucket of water reform.

Although progress is slower than we might like, there’s a growing commitment to transparency and sharing information, which is needed for principled political discourse. There are stories of new stakeholders delving into the ugly underbelly of river system models to understand risk and find solutions, of new and old water users sacrificing short-term pain for long-term gain. Also emerging is what Anne Castle, former assistant secretary of the Interior, called the “human connection” to rivers and water that can transform our relationship with ecosystems. Increasingly, the Western U.S. has something to offer Australians and an opportunity to contribute to a long legacy of mutual learning between the two regions.

There are 50 shades of water risk, and water markets are only one tool to manage them. If we want water markets to work, politics can no longer be a dirty word. Dustin Evan Garrick is Philomathia Chair of Water Policy at McMaster University in Hamilton, Ontario, Canada. He has visited Australia five times since its 2007 Water Act was passed, including a Fulbright Fellowship during the rollout of the Murray-Darling Basin Plan in 2010-11. His new book, Water Allocation in Rivers Under Pressure _, focuses on evolution and performance of water markets and river basin governance in the Western U.S. and Australia.

_ Top photo: A flock of sheep drink from a dam at the edge of the dried-up Lake George, about 250 kilometers (155 miles) southwest of Sydney, Australia, on Tuesday, March 3, 2015. Australia’s outback and surrounding regions are a vast, arid and semi-arid area that are perpetually on the verge of, or in the midst of, a drought. Farmers must constantly explore different ways of keeping their livestock hydrated, crops watered and themselves alive by making use of dams, storage tanks, artesian wells and water-sharing agreements.

If you have any questions or would like to be contacted by one of our team, please send us an email with your details.

Mapping drought a surprising mix of art and scienceNews